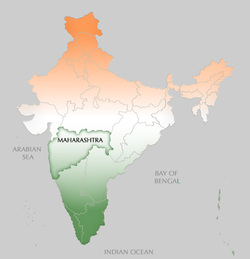 Map of Maharashtra region, India [7]
The rising suicide rate among farmers in India has been well documented by both scholars and the mass media. While each case is unique and each loss is devastating for the farmers’ families and friends, some trends can be seen regarding the social causes behind many of these suicides. The most common causes for farmer suicides in India, specifically in the Maharashtra region [1], can be placed into three interconnected categories: economic, environmental, and social.

The economic forces behind many farmer suicides stem from several problems, all of which relate to Durkheim’s idea of anomic suicide. Indian farmers who have the means to take out loans (with the notion of increasing production and eventually profit) often do so, as loans are necessary to keep up with the rising costs of inputs such as seeds and fertilizer. After acquiring a loan and investing all of their capital (borrowed and private) and labor into the farm, a farmer in Maharashtra must sit back and wait for the monsoons to come.

Environmentally, farms in Maharashtra are not-resilient [2], meaning that farm systems here are unable to regenerate or “bounce back” after facing an environmental shock, such as a drought. Farms in this region of India are often planted with monocrops which depend on monsoon rains to be productive and profitable. If monsoon rains are less than expected, crops will fail. Farmers who have taken out loans are then faced with the enormous burden of repaying their debts with the miniscule revenue turned out by their monocropped, unproductive farms.

The social causes underlying many farmer suicides stem from the rise in prominence of agricultural technologies among commercial cultivators. Many of the farmers in the Maharashtra region who have committed suicide were not subsistence farmers, but growers of cash crops such as sugarcane and soybeans, and the vast majority of the deceased had been commercial cotton farmers [3]. During the Asian Green Revolution, much attention was focused on increasing agricultural productivity in countries like India. Agriculture intensification practices were endorsed and subsidized by Asian governments, and the use of innovative agricultural technologies rapidly increased. One such agricultural innovation is Bt cotton in India. This variety of cotton is genetically modified to resist cotton bollworms, a common and highly threatening pest for Indian cotton growers [4]. Unfortunately, as Bt cotton has become increasingly popular among Indian commercial farmers, information flow about this technology cannot keep pace.  Agricultural extension programs are unable to communicate technical tips to farmers (such as what varieties of Bt cotton would grow best in what environments, how much and when to use pesticides on Bt cotton to control secondary pests, etc.), and there is a lack of consistent public information disseminated about the performance of Bt cotton [4]. As a result of this dearth of agricultural information, many farmers plant varieties of Bt cotton that do not match the environmental conditions of their farms, inappropriately use pesticides, and are carried away by the wave of “technological optimism” [3] that accompanies rumors of vastly increased cotton production through the use of Bt technology. 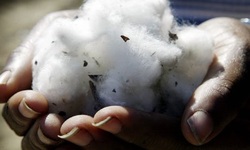 Photograph of cotton in hands, S. Olson [8]
The economic, environmental, and social problems facing many Indian farmers, when taken altogether, can result in disappointed hopes, indebtedness, and anomic suicide. The disparity between a farmer’s expectations (and thus the risks he or she takes) and his or her experienced reality is immense, and it can be likened to Durkheim’s gap between needs and means. The tendency towards anomic suicide, however, is not common among farmers in all developing countries. Agricultural systems in Malawi, for example, are similar to Indian agricultural systems in many ways, but farmer suicides in Malawi are very rare. How can we account for this discrepancy?

First, unlike many Indian farmers, Malawian farmers do not typically have access to formal credit, and instead must rely on assistance through kinship networks when they are in need.  The lack of credit is both detrimental and beneficial: detrimental in that without credit Malawian farmers do not have access to inputs, such as fertilizers and pesticides, but beneficial in that without credit Malawian farmers do not accrue debt in the same fashion as many Indian farmers. Second, while Indian farmers must try to adapt to new agricultural technologies, such as Bt cotton, with their primary assistance coming from seed companies instead of agricultural extensionists or the Indian government [4], many agricultural innovations in Malawi are supported by NGOs and government-sponsored extension programs [5]. Malawi’s agricultural extension program is not perfect by any means [5], but the spread of agricultural innovations is typically accompanied by accurate information, unlike the relative lack of guidance given to Indian farmers regarding Bt cotton. Finally, the majority of Malawian farmers are involved with agriculture to sustain themselves and their families, not to turn a profit (like the commercial cultivators of Maharashtra). The primary expectation of most Malawian farmers, therefore, is that their farms will produce enough food to feed their families, and they are much less likely than Indian farmers to be swept up (and subsequently let down) by overwhelming technological optimism. 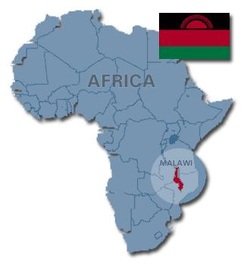 Map of Malawi, Africa [9]
Through a combination of the lack of access to credit (and debt), the aid of a supportive agricultural network comprised of both NGOs and government actors, and the presence of socially-bounded production expectations, Malawian farmers experience a smaller gap between their expectations or hopes and their experienced realities. In the language of Durkheim, Malawian farmers do not experience the same degree of disparity between their perceived needs and their means as do Indian farmers of the Maharashtra region. Perhaps this is why the rate of suicide among Malawian farmers is exponentially lower than that of Indian farmers.

Looking ahead, as the agricultural sector of Malawi continues to grow and as credit inevitably becomes more widely accessible, it is important to keep in mind the aforementioned differences between the Malawian and Indian agricultural systems and to note ways in which Malawian farmers can prevent an epidemic of disappointed hopes.  It would behoove extensionists in Malawi to continue their current practice of supporting agricultural innovations and widely disseminating related information, so farmers will continue to understand the best use of their resources and eventually of borrowed money. It would be similarly advantageous for the Malawian government to dedicate ample resources to the improvement of the country’s infertile soils (via research and extension efforts), so as to build up the resilience of the agricultural system.

When Durkheim tells us that the key to happiness (and thus the escape from anomic suicide) is the acceptance of our constraints, he does not necessarily mean that we should settle into our social positions and never strive for more. We can and should strive for the realistic betterment of ourselves and our positions. By setting attainable goals for ourselves, we can hope for small gains but avoid crushing despair if our goals are not realized. Most importantly, if we consciously work together, as do so many Malawian farmers, extensionists, and aid organizations, we will be supported even in the face of disappointed hopes.