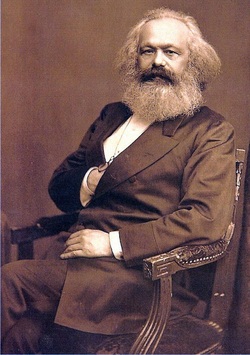 Karl Marx [2]
Karl Marx (1818-1883) is best known as the father of communism. He mastered many disciplines including history, economics, sociology, geography, politics and literature. He studied law and philosophy in Germany, during which time he joined the radical group Young Hegelians. After completing his doctorate in 1841 at the University of Jena, he became involved in political, economic and social issues.

From 1942, Marx was an activist and worked at radical newspapers in Germany and then France. During his time in France, he collaborated with and befriended Friedrich Engles. After being expelled from France for their behavior, they went to Belgium where they published “The Communist Manifesto” in 1948. It argues human history has been based on struggles of class and this struggle would disappear with the takeover of the proletariat.

In 1849, Marx was exiled from Belgium and moved to England where he was financially supported by Engles. There he wrote “Das Kapital”, a book credited with changing the world. He believed capitalism is a flawed and unstable system because it eliminates labor and destroys human beings. He argued capitalism would eventually self-destruct. He believed socialism and a classless communist state would be ideal. In this way, resources could be equally shared.

Marx died in 1883 without seeing his ideas carried out. Afterwards, his writings formed the base of modern communism. Central to Marxism, is a method of understanding and criticizing the world and its interconnections. His writings are still used today, and as the world economy has suffered, more of them have made a return [1].