Max Weber: An Introduction to Rationality
By Katherine Dentzman 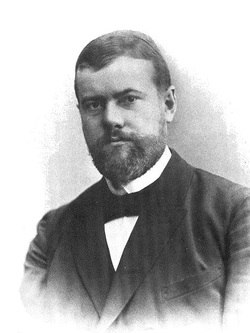 Max Weber [4]
When people think about critiques of capitalism, the first big name that comes to mind is Karl Marx. He is undoubtedly one of the most prominent names in sociology, and his writings on capitalism and his notion of the ideal solution, that is to say communism, are well known even to those outside of the academic world. However, there is another writer widely studied in sociology who also grapples with the specter of capitalist enterprise. He is much less well known than Marx, and his ideas less publicly contested. Still, he provides a great alternative and criticism to Marx’s idea that capitalism will naturally evolve into socialism and then capitalism. His name is Max Weber.

Weber lived and wrote in the late 18 and early 1900’s, and the majority of his essays directly related to, and often disagreed with, Marx’s writings on capitalism and the economy [1]. While Marx believed that the common working man would eventually gain a class consciousness and rise up to overthrow his oppressors, Weber had a different take on things. He believed in rationality, which is the programmatic, logical, rule-based and bureaucratic way of doing business and conducting life in general. A common metaphor used to understand rationalization is ‘McDonaldization’, which emphasizes efficiency, predictability, calculability, and control [2]. For instance, when you go to McDonalds and you order a hamburger, you expect to get the same kind of hamburger you have gotten at every other McDonalds you have been to. It is predictable. Chances are, a lot of the work to prepare your burger will be done with the use of machinery and following a set of specific guidelines. There is a high level of control and little room for creativity or error. The process will likely be fast, streamlined, and efficient, and you will get a large quantity of food (although not necessarily the best quality). These are all defining characteristics of rationality, and can be applied to all sorts of institutions in our current society. Just think about the self-checkout lane at the grocery store, ATMs, or assembly lines for more examples of structured, streamlined, technological efficiency.

With his belief in the concept of rationality and how it has come to dominate our society, Weber contradicted what Marx believed about capitalism. Instead of seeing it as something that can and inevitably will change, Weber posited that we will become trapped by our own rules and rational processes. While he did not deny that one day in the faraway future socialism may become a common way of life, he did not hold the same view as Marx and indeed believed that the level of state and government control inherent in socialism would simply reinforce the presence of power in the hands of the few and tighten the hold of rationalism [3]. 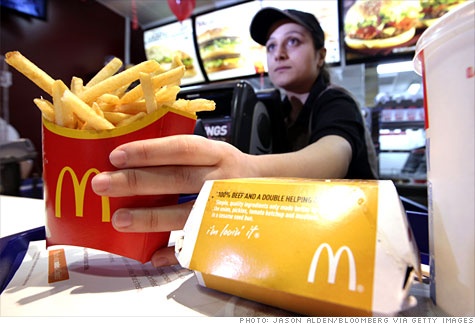 McDonalds Worker [5]
An essay that utilizes Weber's ideas is about agri-tourism.

1. Weber, M. (1958). The Protestant Ethic and the Spirit of Capitalism: The relationships between religion and the economic and social life in modern culture. New York, NY: Charles Scribner’s Sons.

2. Rogue Valley Group. (2009). What is McDonaldization? Retrieved from: http://www.mcdonaldization.com/whatisit.shtml