Past, Present, and Future of the Peasantry
By Jacob Watson 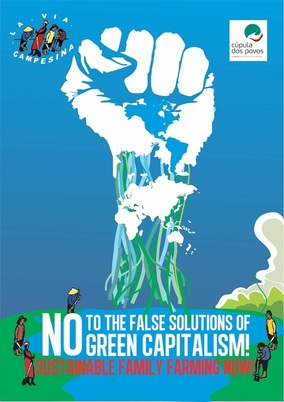 No to Capitalism [7]
The sociologist Karl Marx theorized how capitalism could bring about a revolution that would usher in communism. This revolution would be the result of the oppression of the working class in a capitalist system. Marx theorized as the top minority acquire more the bottom majority will lose more, including their land, forcing them to become wage earners instead of land owners. This is the story that is being played out for the peasants of Latin America. The North American Free Trade Agreement (NAFTA) has recently put a greater strain on the peasant class in this region and peasant groups are starting to become more organized on the state, country, and even international stage. Are these the steps towards the revolution Marx theorized would come from the spread of capitalism or will another, more peaceful outcome, be realized?

To begin we must first define a peasant. The Merriam-Webster’s dictionary define peasant as “a usually uneducated person of low social status” [1]. This definition however misses some of the feeling that the current peasant movement is trying to capture. The peasant of today is one who is empowered by this label as a person who is part of rural working community. Where the term peasant was once used to describe oppressed peoples now symbolizes a global community that is connected through the idea. Karen Pedersen of the Canadian NFU states “I am reclaiming the term peasant because I believe that small is more efficient, it is socially intelligent, it is community oriented” [2]. This community consists of the displaced and now landless wage earners who are joining together so that their collective voice can be heard and change can be brought to their social class. As groups such as La Via Campesina and the Landless Rural Workers Movement grow in size and influence the road to this change is becoming more clear.

Marx’s theory of revolution revolves around pressure being put on the lower classes to the point that they can’t be exploited by the capitalist system any further. NAFTA was a step in that direction. NAFTA was enacted in 1994 with the goal to eliminate all tariffs between trades import/export tariffs between the United States, Mexico and Canada. The goal was to increase efficiency in production and encourage investment across the borders of these three nations. An unexpected side effect of the open borders was a large influx of cheap corn from subsidized US growers. This large scale production could not be matched by the small scale rural farmers in Mexico who were then driven out of the market. The investments that this encouraged where most often in the form of US led business entrepreneurship into Mexico. These two effects created an environment that pushed Mexican corn farmers, who were previously land holders, to become low wage workers for American-owned businesses. This transition fits perfectly into Marx theory as the separation phase which is when the peasant becomes a landless worker and is one of the key steps towards revolution.

With the stage now set by NAFTA and the growing group of displaced agrarians the current class of the peasantry is becoming more organized. Under this new capitalist threat that is pouring across the border of the US and into Mexico many believed that the peasant would vanish. Marx himself predicted that under agrarian capitalism the peasant would fall to the industrialized agriculture system that comes from the desire to become more efficient. However it seems that it is on the agrarian issue that the peasants are making their stand. As one definition of the peasant is a person of the land it is no surprise that issues of the land have fostered powerful group organization. The difference in the peasantry of the present and those in the past is in the structure, organization, and education of the groups who are now coming forward to fight for these issues of food production. Their desire to regain their land and be in control of what is grown on it gives the movement it’s sense of urgency. This new form of peasant has been able to escape the political entanglement and corporate control of the local level and has emerged on the world stage. The leaders of many peasant organizations are educated and able to navigate the globalized economies and the policy frameworks that guide the whole system. By positioning themselves on this global stage they have been able to push for national and international policy reform. Hopefully this will be able to counteract some of the devastation felt from the advancement of capitalism.

The future success of the peasantry is dependent on their organization and power on the world stage. The impact and reform that is needed will come through the power of their numbers. As their presence is more widely accepted on the global level the full power of the numbers will allow them to influence policy. It can already be seen by recent polls in Sao Paulo, Brazil where 75% of the public would favor policy reforms that would redistribute land to the peasantry [3]. As they become more organized the path to escape from oppression might not be through the kind of revolution Marx thought would come about. Instead it may be possible for the class to actually change the economic climate to their benefit. By organizing on the international scale it is possible for them to come together outside of their national levels and effect change at a higher level. This betterment however might bring about the kind of revolution Marx had predicted. “Revolutions are most likely to occur when a prolonged period of objective economic and social development is followed by a short period of sharp reversal” [4]. This thought may mean that the increase in livelihood brought about by this greater organization might actually be what finally brings about the revolution that overthrows capitalism. The only thing that can be said about the future of peasantry is they are not vanishing and are continuing to make life better for themselves. Whether this happens through organization and policy change or through Marxist revolution remains to be seen.

7. (Say no to green capitalism) Source:http://www.grain.org/bulletin_board/entries/4523-the-people-of-the-world-confront-the-advance-of-capitalism-rio-20-and-beyond