While Weber used rationalism as a broad concept to help understand the bureaucratic form of society, he also broke it down into smaller units to help analyze more individualized actions. One way he did this was through the use of the concepts of formal and substantive rationality. These forms of rationality have to do with decision making and can be applied to a single person or a larger entity. Essentially, formal versus substantive rationality is equivalent to economic drivers versus non-economic drivers.

These are forms of rationality, let’s remember, so Weber is working under the assumption that people do not make decisions at random and with no logically thought out reasoning. Instead, he is presuming that a good deal of weighted analysis goes into the process. In his view, this rational decision making ends up being a kind of value attribution to formal motivations versus substantive motivations, and an end is reached when the individual chooses a point on the continuum between the two [3]. You can think of it kind of like a number line; on one end are the economic reasons for engaging in an action, and on the other end are the non-economic reasons. Depending on how important the reasons on each end are to you, you will land somewhere on the number line between the two. Formal, that is economic, rationality means that you will choose whatever action results in monetary gain, stability, opportunity, etc. Substantive, or non-economic, rationality has more to do with things like emotions, relationships, aesthetics, etc. Both are important for understanding how and why people make decisions, and in fact are often used by scholars to analyze just that.

The Decision to Engage in Agri-tourism 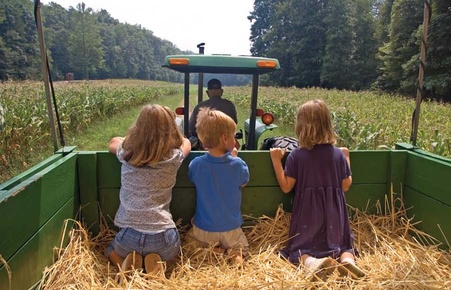 Agritourism hayride [9]
Agri-tourism is one of the areas of tourism receiving the most focus in recent years [1] . You may be familiar with it on a personal level from trips to an apple orchard/cider mill, a pick-your-own-pumpkin patch, or even a commercial flower field. It is, essentially, any tourism opportunity that involves the operation of a working farm. This is a very attractive option for farmers who may be struggling to make money in an economy that is increasingly controlled by a few large corporations. There have been several studies on the various reasons that farmers might choose to go into agri-tourism, and of these there are a few that focus on formal and substantive rationality directly [1,2]. These studies conclude that the choice is based on a combination of formal and substantive rationalities, with precedence often due to the farmer’s previous economic condition.

Formal reasons for farmers to engage in agri-tourism include supplementing their regular farm income, providing on-farm jobs for family members, and being able to afford to keep the farm [1]. Substantive reasons include doing agri-tourism as a hobby, preserving a farming lifestyle and landscape, cultivating farm family values, and educating the public [1]. In the studies, farmers always replied that a combination of these factors influenced their decision to go into agri-tourism, although for some formal rationality was stronger and for some substantive won out. Which one of these was the primary factor depended in large part on how much the farmer needed the extra income that agri-tourism can provide. A farmer who is about to lose her or his farm would likely have a much more formal rationality for engaging in agri-tourism than a farmer who started into the business as a hobby because (s)he likes interacting with the tourists. 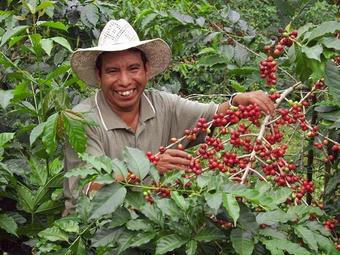 Tour de Café in Jayaque, El Salvador [10]
Tourism, and increasingly agri-tourism, is being looked at as a viable economic opportunity for poor people in developing countries. At its best, it interferes little with the relevant culture and community, allowing tradition and the natural environment to remain relatively undisturbed while also providing the local people with more diverse economic opportunities [1,3]. However there are problems with tourism as well. Its benefits can be unevenly distributed across the community, causing discord and a further unevenness of income. There are also issues with moving labor away from other enterprises, and non-local control of important institutional components [4]. Still , there are many possibilities for positive outcomes from tourism, and agri-tourism is no exception.

One distinct advantage of agri-tourism is that people don’t necessarily have to change aspects of their culture or livelihood to participate. In fact, these aspects are often what make agri-tourism attractive. Many countries in Latin and South America have had a good deal of success with agri-tourism that plays off of the local culture [3]. For instance, Coffee Tours in Jayaque, El Salvador uses the region’s coffee growing heritage to distinguish themselves from other tourism opportunities, while managing to hire local employees and forming a group of local stakeholders to help make a cohesive business plan. Their success is due in part to the strength of the community and multiple local authorities coming together with a common vision and dedication. However, support from non-local private entities is also key.

Another example is from Riosucio, Colombia where a tourism industry has been built around growing, preparing, and selling thousand-year-old varieties of corn [3]. This industry not only provides much needed income for the rural poor, but also helps to validate local knowledge and tradition. The kinds of corn used for traditional dishes help maintain a cultural relevance and a strengthening of traditional and cultural values that are often otherwise displaced by industrialized forms of enterprise. Similar examples of cultural recognition and preservation, even restoration, are occurring in Venezuela, Peru, Panama, and many other countries. 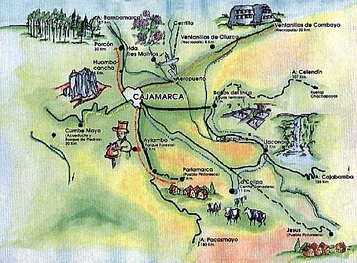 Cajamarca, Peru Tourism Map [11]
A contrasting example is that of Spatial Development Initiatives (SDI) in South Africa that focused on agri-tourism in the Wild Coast region of the Eastern Cape [4]. This development aimed to involve the community, making them responsible for management of assets, shared control over land, and equitable shares of the enterprise. However, several problems arose during the implementation of this plan. One of the most pressing was the definition of community and how to distribute tenure rights to land that is communally held. This created discord within the communities targeted for agri-tourism development and slowed the process. Additionally, although control over access to training or jobs was supposed to be equal, an elite sector of individuals quickly accrued these advantages. A lack of government funding was also cited as an issue, as well as the rapid fire pace with which the plan was implemented, often at the cost of hiring less-skilled laborers from the immediate community in favor of technologically savvy outsiders. Overall, it was concluded that national plans for agri-tourism are not necessarily applicable across different localities and contexts, and the specific challenges and goals of each community need to be taken into better consideration.

Why is Motivation Important? 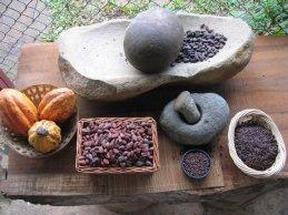 Spice Plantation Tour, Costa Rica [12]
While it may be good to understand how formal and substantive rationality influence farmers’ decisions to go into agri-tourism, a more pressing question is how this information can be used. What is the benefit of knowing that a farmer wants to go into agri-tourism primarily to preserve their unique lifestyle and secondarily to make a profit, for instance? One of the main uses of this information is in the planning of agri-tourism initiatives to recognize a cohesive goal among stakeholders, along with providing relevant information on the kinds of support needed for outside investors, government and non-governmental organizations, etc. [4].  A case study from Costa Rica will help further elucidate this concept.

Costa Rica has many agri-tourism initiatives, including an ecologically friendly coffee-growing enterprise located in Argentina, Pocora (Argentina in this case refers to a town in Costa Rica, not the country)[3]. Costa Rica at large, prior to 1999, had a strong focus on coffee growing. However, after 1999 coffee prices on the international market dropped severely and many businesses moved on to growing more non-traditional products. A small group of farmers in Argentina, though, resisted this transition. They envisioned an agri-tourism industry in which they produced coffee sustainably, teaching tourists about the natural ecology of Costa Rica while at the same time maintaining their lifestyle and community.

In order to achieve these goals, farmers within the community formed the Argentina Pocora Agroecotourism Association. One of the first things the association did was outline their objectives, which centered around the quality of life in their community, environmental and cultural integrity, and lastly the generation of income. This is an extremely important step in the formation of an agri-tourism enterprise and can benefit hugely from a recognition of formal versus substantive rationality goals. It is vital that all involved parties openly identify their objectives. This will determine what kind of projects they undertake, who they hire, what organizations they apply to for funding, which aspects of coffee growing should be supported and emphasized, etc. Without a clear understanding of what the farmers’ motivations are, confusion and gridlock can slow down or even undermine the enterprise entirely. For instance, in another part of Costa Rica, called Sarapiqui, agri-tourism revolves around the growth of pepper, which is a non-traditional crop introduced in the 1970’s. The primary objective for that community was to improve the socioeconomic standing of local families, and although the history of pepper’s introduction to Latin America plays a role in the tours, the primary goal of this initiative was economic rather than cultural. The initiative survived because they had a clear, agreed upon goal, even though their focus was more formal than that of the Argentina community.

Thinking back to the South Africa example, we can see how differences in objectives and in interpretation of program goals can negatively influence program outcomes. The original goal of the SDI was to involve community members to the highest degree; however the community members themselves were less interested in working as a cohesive unit which resulted in a few well-off members taking control of training and job opportunities [4]. Government programs also stressed the fast movement of the initiative and ended up hiring laborers from outside the community. This discrepancy in outlined objectives (a mix of substantive community involvement and functional economic growth) and what actually occurred (both community members and external institutions focused heavily on the formal rationality of profit and efficiency) ultimately resulted in a program that broke down and failed to achieve its initial purpose. Here we can see the vital importance of understanding, recognizing, communicating, and agreeing upon the motivations and goals of agri-tourism enterprises. In Costa Rica we have several examples of how the community came together to agree upon their purposes, and organizations aiding them were able to recognize this and provide relevant support, while in South Africa cloudiness over the purpose of the initiative allowed for individual actors to supplant their own goals in place of community benefits. These examples clearly illustrate the importance of understanding the rationality of farmers’ and other community members’ motivations as a cornerstone for agri-tourism development. Hopefully in years to come this can be implemented to help in achieving local and community goals for agri-tourism enterprise, allowing it to grow to its full potential as a support structure for both substantive and formal objectives.

5. Hinrichs, C.C. (1995). Off the treadmill? Technology and tourism in the North American maple syrup industry. Agriculture and Human Values 12: 39-47.