Capitalism, Sustainability and Biofuels: Strategies for the Future in Ethiopia and Worldwide
By Kate Glanville 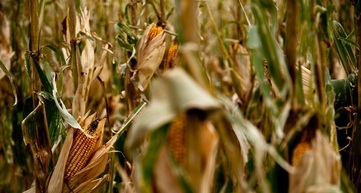 K. Glanville
Following the collapse of the Soviet Union and the spread of capitalism throughout the world, many areas of human life have been reshaped. However, capitalism has its drawbacks. Capitalism is most famously criticized by Karl Marx and Friedrich Engles. The purpose of this essay is to explore the connections between capitalism, sustainability and biofuels through a sociological lens. The final part of the essay provides possible strategies for the future of biofuel production in Ethiopia and worldwide.

Part of Marx and Engles’ disdain for capitalism stems from the association of capitalism with environmental degradation and the resulting lack of sustainability of the economic and social system. Agriculture’s negative effects, such as land grabbing, deforestation, pollution and the degradation of ecosystem services, occur under capitalism, neoliberal ideologies and uneven development. Natural resources are subject to over exploitation under capitalism because the costs of environmental degradation are not included in the market. Peoples’ desire to make a profit outweighs the perceived long term benefits of preserving resources. 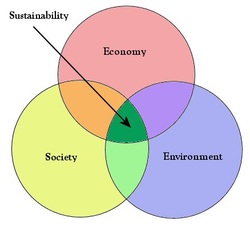 Sustainability Venn Diagram [8]
With increased greenhouse gas emissions contributing to global climate change, ecosystem services people depend on have been disrupted. The indirect consequences of capitalism are vast. The use of biofuel is being promoted as a way to potentially mitigate climate change. Biofuels are converted from plants, which capture energy from the sun and turn it into sources of energy humans can process and use. This reduces greenhouse gas emissions because it doesn’t put new carbon dioxide into the atmosphere as fossil fuels do. Instead, the use of biofuels returns the carbon dioxide to the atmosphere that was used by the plants to make energy.

Biofuels and other alternative sources of fuel are preferred over significant structural change of the market, such as limiting consumption. Biofuels and other new technologies can be adopted without changing or questioning the economic system. They also act to mitigate increasing oil prices. For example, biofuel use is promoted by the European Union (EU) to increase the percentage of renewable energy and reduce their dependency on oil imports and greenhouse gas emissions. It is also done to stimulate rural development in the agricultural sector [1].

With this new implementation of the EU strategy for biofuels, it is important to consider sustainability of the system. The sustainability of biofuels has complicated environmental, social and economic aspects. All of them are interconnected and must be considered in order to minimize harm and have a positive effect. Congruent with Marxist theory on the negative effects of capitalism, biofuels have had negative effects. Some environmental, social and economic aspects are explained. Current negative effects do not determine the future, but are important to avoid when considering new opportunities. 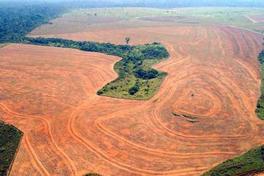 Deforestation in the Amazon [9]
A 2008 Science article explained that while biofuels may mitigate carbon dioxide emissions, their use has greater environmental costs than oil. This is true for the three most economically important biofuel crops, (maize, surgarcane, soy diesel and palm oil) for several reasons. First, the nature of biofuel crops requires large areas of land, taking up both farmland and previously native areas. This occurred when Amazonian forests and Brazilian tropical savannas were destroyed to plant soybeans because much of the land previously used for soybeans worldwide was put towards maize. The destruction of these native lands emitted greater amounts of carbon dioxide than was countered by the use of biofuels. Second, these large areas of continuous crops are termed monocultures. While monocultures are more efficient in terms of management, they have numerous negative effects. They decrease biodiversity, hamper hydrological functioning and increase soil erosion. Third, some biofuel crops require nitrogen fertilizers. Nitrogen fertilizers increase the emissions of nitrous oxide [2]. Nitrous oxide is an important greenhouse gas ~298 times more impactful, over a 100 year period, than carbon dioxide [3]. 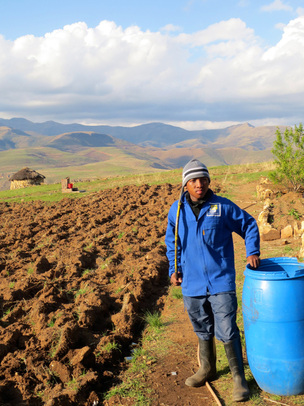 K. Glanville
Degradation is not only an environmental concern, but a social one as well. The aspects of biofuels cannot be considered only a scientific issue, but also one that incorporates social issues in determining sustainability.

Although biofuels constitute a small contribution to global energy, a slight increase in their use will necessitate a large change in land use away from food crops. This will increase food insecurity as land is converted into use from food production to biofuel production. Planting biofuel crops rather than traditional food crops has raised global food prices. This has caused the role of biofuel policies to become controversial. Rapid increase in demand of biofuels has also affected the global grain supply-and-demand system. This is because the raising maize prices have affected other grains. Food consumers have shifted away from purchasing maize and towards rice and wheat. However, farmers have shifted towards planting maize, as they can sell maize at higher prices. This decrease in wheat and rice supply has caused increases in their respective prices [4].

To be sustainably implemented as an alternative to oil, biofuel not only needs to be sound environmentally and socially, but also needs to be economically viable to producing farmers and nations. In 2005, biofuel production was not cost competitive in comparison to oil without subsidies (like those available in the United States). However, further oil price increases have improved the cost competitiveness of biofuels. In addition, with increasing demand for biofuel caused by policies requiring the use of fuel blending, it will become economically more competitive [6].

All of these effects have disproportionately negative impacts on the rural poor. These problems are expected to get worse in years to come as capitalist become increasingly interested in biofuels. This demonstrates the negative consequences of capitalism defined by Marx. Capitalist policies disproportionately result in negative consequences of the poor in order to benefit the rich. 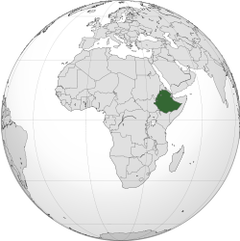 Ethiopia [10]
Since the 1970s, Africa has had uncompetitive agricultural exports and oil crises as global prices increase. Therefore, Africa is being targeted as a biofuel production zone to improve global energy security. In the case of Ethiopia, biofuel production is a new development initiative. The country expects the dominant form of biofuel production to be contracted by smallholder farmers. While this development has many promises, it also poses many challenges including land ownership, fertilizer application, lack of entrepreneurial education and organizational trust and poor acceptance rate.

Ethiopia and other countries need to be prepared strategically to handle the globalization process taking place. Production contracts should be supported to create conditions conducive to exchanging agricultural inputs and services for biofuels. To ensure sustainability of contract farming, local stakeholders need to create long term partnerships. This needs to be done carefully so it helps the rural poor instead of hurting them [5].

Overall, there is a need for concerted action on the best way to tackle the issue of biofuel production without compromising the livelihoods of local people. Therefore, biofuel strategies and policies need to be based within rural livelihoods. Policies also need to target the ways in which the production of biofuels can bring about rural transformation and change.

The nature of exponentially growing economies, especially the wealthy countries, is unsustainable. The same can be said or biofuels. There will never be enough land to suffice our demand if our demand is increasing so dramatically. Global inequality is the real issue and the richest nations need to consume less so that the poorest countries can consume more. Policy focus needs to shift from technology and energy to reducing consumption and environmental degradation. Many rich nations advise their citizens to do so; however, most recommendations and guidelines are of a voluntary nature and seem to have little effect on actual practices.

Biofuels could play an important role in the future of climate mitigation, rural development, and economic progress. However, implementing biofuels without the proper steps will lead to collapse of the capitalist system. The next steps must be organized. Regardless, the future of biofuels will not vanish. Whether their further implementation will be positive or negation remains to be seen. Currently, biofuel production isn’t sustainable. Further analysis is needed to anticipate inevitable problems and all-encompassing policies to address them. Timely identification and fine-tuning of policies will improve the sustainability of biofuels’ use as a renewable energy. Changing towards more socially just, economically viable and environmentally sound policies and practices is a continuous process.

9. Deforestation in the Amazon [Photograph]. Retrieved December 1st, 2012, from: http://www.indigenous.youth-leader.org/wp-content/uploads/2011/08/amazon_deforestation.jpg